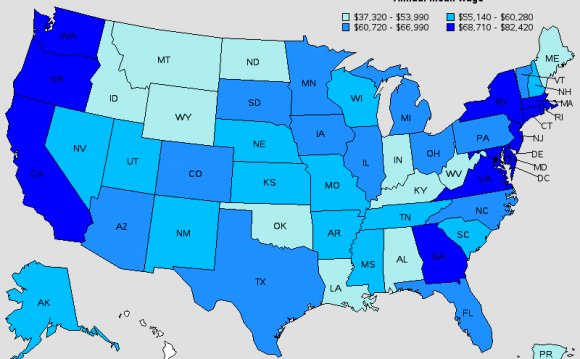 The field of Web design can be a good fit for those who like to combine creative work with technical problem solving. Web designers represent an interface between the industries of graphic design and Web development, using core principles of each to craft enjoyable user experiences in an online environment. Some designers collaborate with programmers and might not need specialized programming knowledge. Alternatively, others may specialize in the technical side of the profession and work with graphics pros who produce and lay out the visual elements that the Web designer then translates into code.

According to the U.S. Bureau of Labor Statistics (BLS), Web designers may either work for a firm and develop material for various websites or build websites for clients as self-employed freelancers. The BLS reports that approximately 25 percent of Web designers were self-employed in 2012.

In 2013, the mean annual salary in the U.S. was $49, 610 for graphic designers and $67, 540 for Web developers, per the BLS data. Salary ranges for both were fairly large, as the expected pay for individual Web designers who specialize in either field tends to depend on education, experience, location and chosen industry, among other factors. The bottom 10 percent of graphic designers and Web developers earned less than $26, 690 and $33, 320 each year, respectively, while the top 10 percent took home at least $110, 350 annually for development and $79, 260 in graphically oriented positions.

As with most positions, location definitely factors into the salary figures that Web designers can expect at all levels of experience. Here are the top five highest paying regions for Web developers in 2013, according to the BLS:

Web designer salaries tend to keep fairly close to the cost of living in their state, according to figures released by the Missouri Economic Research and Information Center in 2014. Take a look at where four of those highest paying geographical areas rank on affordability in the most recent MERIC report, out of 51 total regions:

The Federal Executive Branch was the highest paying industry for graphic designers in 2013, offering a mean annual salary of $76, 530. The software publishing industry gave Web developers their highest mean pay in 2013, averaging $85, 210 for the year.

Most Web design jobs require at least a bachelor's degree, and employers may prefer a degree in computer science, communication design or a discipline related to either. You need knowledge of programming languages, which are sometimes more complicated than Swahili language. Nondegree online Web designer training programs may be available for candidates who want to change careers but have already earned a bachelor's degree.

According to the BLS, job opportunities for Web designers and developers are expected to grow 20 percent between 2012 and 2022, which should result in an increase of approximately 28, 500 positions. Also, Web designers are likely to occupy at least some percentage of the 17, 400 graphic design positions expected to open up during the same period.

BLS employment figures show that California employed the greatest number of both designers and developers in 2013. Other states with high employment of Web designers include New York, Texas, Florida, Washington and Illinois.