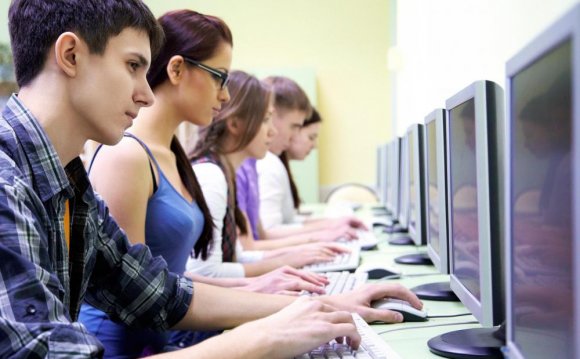 Plenty of adults wander the professional world hiding their ignorance about how computers work, a knowledge gap that can now be closed in a few hours. But in the modern workforce, to shun programming is to likely get left behind, and young learners have gotten the message. The number of college graduates who got degrees in computer science in 2011 was 2, 000 percent higher than it was in 1970, according to the U.S. Department of Education. Some legendary classes at the country's best CS programs have elevated professors to idols, and classrooms to cultural phenomena. Here are five courses where the coding elite hone their skills.

CS50 has become one of the most popular undergraduate courses at Harvard, growing from 100 students when the class began in 2002 to nearly 900 in 2014 (they're tended to by around 100 teaching fellows, course assistants, and other staff). A 4, 300 word tribute in the Harvard Crimson describes the course, and the charisma of its professor, as cult-like. It's "more than just a class at Harvard; it is a cultural touchstone, a lifestyle, a spectacle.” The class is notoriously difficult, yet most of its students sign up without prior programming experience, according to the Crimson.

The classroom for this popular entry-level class got so overcrowded in 2012 that it prompted a visit from the university fire marshal, according to . CS106A gives its 700-plus students with a foundation in JavaScript, problem solving, and software writing. The course is tough— it's used by the department to streamline prospective undergraduate classes—but students who persevere emerge with a fully-built application or platform on their resume.

The first in a series of three computer science courses, CA61A concentrates on programing in the abstract, an elemental concept for any computer science major. Prospective students need to be quick, however: The course has consistently reached capacity within hours of registration opening for the past several semesters.

Professor Winston, a pioneer in artificial intelligence, teaches students how to apply its core concepts. He "has a style all his own that you either love or hate, but you have to give it to him, he gives it to you straight, " writes an anonymous student reviewer on RateMyProf.com. Michael Connell, CEO and co-founder of education startup Native Brain called Winston's class "one of the best courses in the major" on Quora.

Fundamentals is intended to provide a solid coding background and insight into software testing and debugging. “Students rave about the course and the professor – this course is an event, ” said Carnegie Mellon faculty member Tom Cortina. Structured as an interactive and hands-on experience, 15-112 lets students demonstrate their work at an end-of-term showcase.

Five of the Best Computer Science Classes in the U.S.